The book described in this post consists of ten chapters, each describing a different 'mind bias' that makes us susceptible to hold untrue opinions about the world. Throughout the book, the tries to tackle the common biases with some data and examples that contradict the so called common knowledge.

At the beginning the author offers a short quiz, that tests your knowledge:

Now, going to the book, you will learn the correct answers to those questions and a bit more. But not to ma this post longer than necessary, let's jump straight to the summaries of each chapter.

Chapter One: The Gap Instinct

It teaches you that you should always look at the whole distribution of some feature/result and not focus on averages or medians. It allows you to see the whole picture and not only a one number which may be distorting the true picture. This show also how different are the distributions and what additional conclusions you may draw from it.

For example, you may look at the typical distribution of wealth in two different countries, one of which is a free market democracy and the second one is a socialist dictatorship. Despite the fact that both of them may have a similar average level of income per capita, you will see that the first one will have a 'more normal' distribution, and the second one will have most of the population on the left, below the average, and a few extraordinary observations on the right which distort the calculation and the overall picture.

What you read and hear in media and internet may influence strongly your worldview, so be careful what you read and try to verify the source and put the reported numbers in context, e.g. by comparing number of deaths in plane crashes or road accidents to the same statistics from the past years - it may occur (as it is the case) that the last year number is in reality very small when compared to ten years back.

You should not extrapolate the trend with a straight line. The real one is usually very different than what your mind is trying to picture. Many trends do not follow straight line but are are exponential (world population), S-shaped (percent of people vaccinated), logarithmic (education levels), etc.

People very often are most scarred of things that do not pose a real threat for them , but because they are very frightening and get a lot of coverage when they happen (like terrorists attacks), seem very real and dangerous. In reality you should be afraid of more common stuff like driving a car and getting into an accident - driving a car is much more risky than flying a plane despite the fact that when a plane crash happens you can hear about it all over the news.

What you must understand is this simple equation:

The more probable something is and the more time you are exposed to it, the higher the risk that will get hurt. So basically, the more distance you make in you car a year, the higher is the risk of an accident.

Seems straightforward, but sometimes people forget it. Like for example after the 9/11 terrorists attacks in the US. Because people got so scared of flying, they started to drive their car long distances. There are some calculations that try to infer, how many people have died because of this during the months after the attacks.

You should not concentrate on a single number without a comparison basis. Everything is relative and you must recognize it to get a correct perspective.

The best way to this is to find a common denominator between the numbers you want to compare and standardize them. For example a number of car accidents in two countries will not tell you nothing about how risk is to drive a car in each of them without taking into account the number of people who live in each of them, and the distance they drive each.

Sometimes the categories being used distort the true picture. To get the right one you need to focus on a whole distribution (it was also mentioned in the first chapter) and try not to infer anything from a single observation (so called anecdotal evidence).

Nothing in the world is certain and predetermined. Everything changes or panta rei as Heraclitus famously said.

Do not focus on what is now, but try to think what are the prevailing trends and how the world will change in the future.

This one is similar to the number five and six. You should look at the whole picture, not only a part of it. What you have seen and experienced, may not apply to the general observation. Your personal experience is not enough to draw any conclusions about a broad theme.

Remember the quote that to a man with a hammer, everything looks like a nail.

Recognize when a scapegoat is being used. Blaming an individual usually does not solve the problem which may be a systemic one that requires a system-wide solutions.

Always try to find a real cause of the problem and not the person responsible. You must reach the source to solve the issue.

Try not to make hasty decisions. The unintended consequences of a not thoroughly thought action may be worse than simply doing nothing. As Winnie the Pooh said: 'Never underestimate the value of doing nothing'.

The best way to deal with a problem is to look at the underlying data and try to infer the causes and solutions.

OK, so we have summed up the book. Now, what are its biggest problems that make it a mediocre read at best? First of all it is very repetitive - you could fit all of the conclusions of the book in a short essay. Many of the chapters repeat the same topic with a different touch, just to make it into a book. Secondly, the whole text feels a little bit dumbed down. If you have read more tan a few books in your life or you have some mathematical/statistical education, all of the material may seem obvious to you and often you may find yourself wasting your time reading it.

Another issue I have with the book are the author's personal views. Despite writing a book titled 'Factfulness' and trying to learn you reaching correct conclusions based on reliable data, he falls a victim of the same biases he warns about.

First of them is so obvious that I wonder how could it make into a final book. In the chapter one, the author shows this picture: 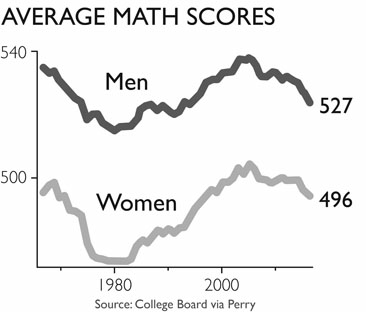 and says that there are seemingly large differences in the SAT math scores between men and women. Then he goes on to presents a different perspective with this chart: 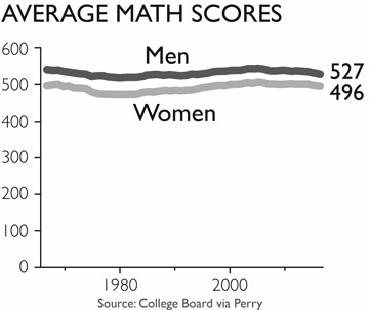 This is supposed to show that differences between men and women are not as large as it may have seemed by looking at the previous one and in reality women are as good in math as men are. So far so good, as the there is a 6.35% difference that may be called not very significant. But let's look at the next chart that shows the full distribution of results among men and women: 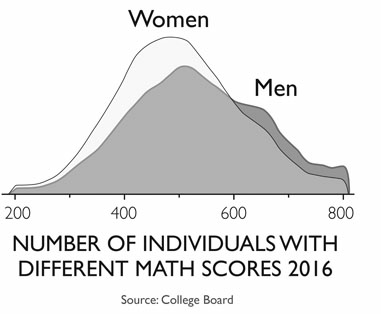 The chart clearly shows that men are better than women at every level - there are significantly more men with top results and less with the worst results. This basically proves that men are better than women in math, or at least that the best math skills are a male feature. The social agenda of the author (as he makes clear throughout a book, he is a some kind of a firm believer in the gender equality) made him susceptible to the same bias he warns against.

That observation proves that being aware of psychological biases does not make you immune to them. Even when you see the data that clearly falsify your opinion.

As Leo Tolstoy has said: "The most difficult subjects can be explained to the most slow-witted man if he has not formed any idea of them already; but the simplest thing cannot be made clear to the most intelligent man if he is firmly persuaded that he knows already, without a shadow of doubt, what is laid before him."

Book Synopsis: "Why We Sleep" by Matthew Walker

I simply wanted to construct a small comment so as to express gratitude to you for all of the fabulous items you are giving at this website. My extensive internet lookup has finally been rewarded with wonderful strategies to talk about with my friends and family. I would assert that we visitors are unequivocally blessed to live in a very good site with many outstanding professionals with very helpful principles. I feel truly happy to have used your entire web page and look forward to so many more thrilling times reading here. Thanks a lot again for everything. stone island clothing [url=http://www.stoneislands.us]stone island clothing[/url]

A lot of thanks for all your valuable effort on this web site. My daughter take interest in conducting research and it's easy to understand why. Most people notice all relating to the compelling tactic you deliver very important solutions through the web site and as well cause contribution from visitors about this concern so our princess is in fact starting to learn so much. Enjoy the rest of the new year. You have been carrying out a wonderful job. curry 8 [url=http://www.curry8.us]curry 8[/url]

I precisely desired to say thanks once again. I'm not certain the things I would've worked on in the absence of these aspects shared by you regarding that concern. It was before an absolute traumatic issue in my circumstances, nevertheless taking note of the professional manner you handled that made me to jump over happiness. I'm grateful for your support and thus believe you find out what a powerful job you were accomplishing training the others with the aid of a site. I am sure you've never come across all of us. kd13 [url=http://www.kd13shoes.us]kd13[/url]

Attached to this post you will find a spreadsheet that allows you to track your ...

To get in touch just write me an e-mail: